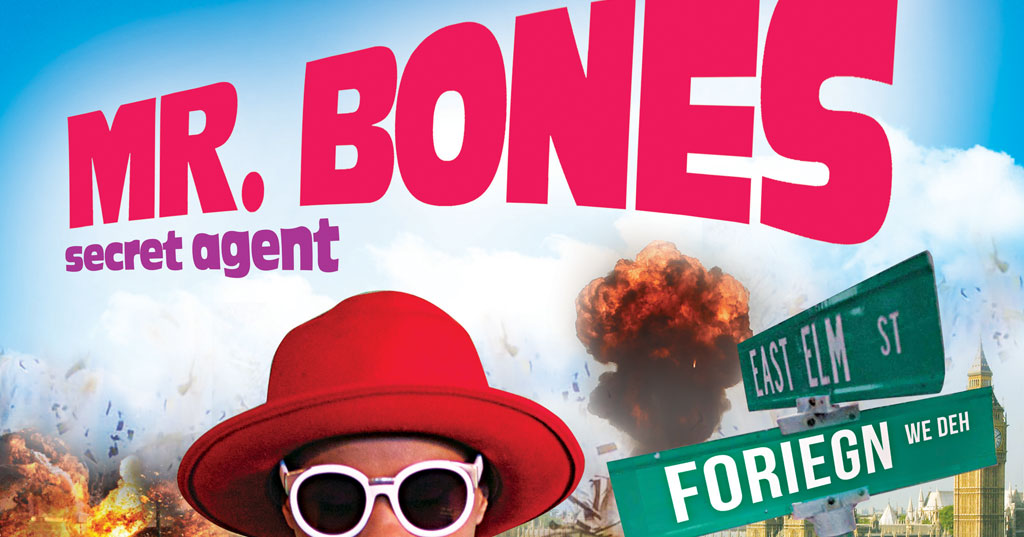 Mr Bones is centered on a plot of a “good for nothing” Jamaican street hustler and con artist who is sent abroad by his Granny to “make good” by doing hard labour as a farm worker.

In a case of mistaken identity, Bones is collected at the airport by a bungling MI6 chauffeur and taken to the secret service headquarters where he is the only witness to a self destruct tape from secret agent 009, in the fictitious African country Whemandu.

Bones leverages the information to secure a job at MI6 to crack the case, as he is the only witness to the code and negotiates a permanent job based on accomplishing the mission.

The report contains the code to save the world from the evil plot of Dambudzo, a megalomaniac African dictator with plans to rule the world by destroying all the worlds oil deposits except his own.

Dambudzo is aided by his nephew, Zutu, who weeps uncontrollably when he does not please his uncle. He plants bombs (in the wrong places) all over Asia with the assistance of an able donkey and sturdy shovel.

This formidable though unorthodox team, includes his Granny who seeks to dominate his every move from afar.

Shadowing Bones on the mission is Slick, a formally trained agent of British/Jamaican heritage with a sleek style and serious demeanour , is shored up by exclusive information from MI6 with the intent of unseating the persistent Bones – lest he become an entrenched agent with MI6

Bones sees the glamourous life he wants to keep, and is willing to execute dangerous feats against his cowardly nature – like a dog that will not let go of a Bone.

Bone’s irreverent and braggadocious manner constantly offends Slick, who,professionally assigned to protect Bones, is torn between killing and saving him.

Damdudzo learns that Bones is trying to foil his plan and sends Pum Pum Plenty, an attractive and dangerous killer to distract Bones and Slick by gaining their trust and working against them secretly.

Pum Pum Plenty is mute and has to communicate in charades leading to many close calls in the face of danger.

The escapades revolve around Bones, Pum Pum Plenty and Slick as they attempt to disarm Dambudzo and his henchmen from blowing up the oil fields around the world.

Eventually Bones and Pum Pum break away to compete with Slick for the prize of solving the case.

There is a ticking bomb, art dealers, Bond gadgets and a retractable glass geodesic dome spanning the action across the globe from Zurich, Kazakhstan and Whemandu as Bones desperately tries to keep his job against all odds, including the rivalry of Slick, to secure a permanent position in the MI6.

Green screen backdrops and live actors to look like cartoons.